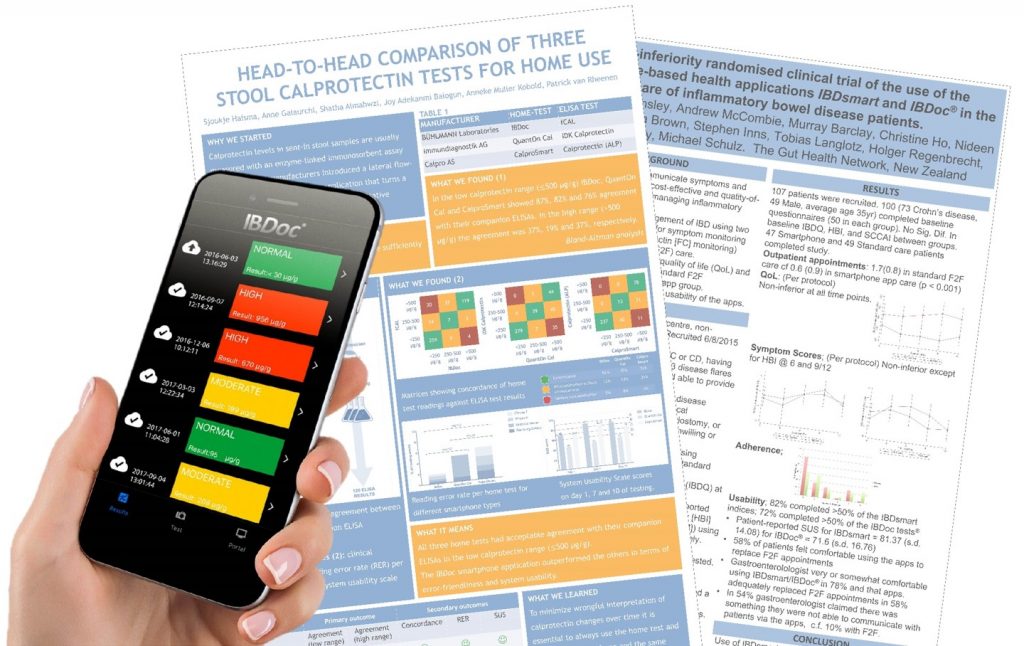 At this years ECCO the ECCO IBD guidelines were updated to include a statement to use fecal calprotectin (fCAL) in IBD monitoring. This means that IBD patients will do many calprotectin measurements over their disease course. At the same time as in all chronic disease the therapy follow-up is more and more done remotely decreasing the time patients with a stable disease course spend at hospitals and allowing the IBD care team to focus their time on patients that actually need it. Therefore fecal home tests have become more and more frequent as part of the clinic routine. With several solutions from different manufacturers there is a need to compare them in regard of accuracy and usability to make sure that the offered home tests are easy to use for patients and deliver accurate results on which the IBD care team can base clinical decisions on. Haisma et al. did exactly that and presented a poster at ECCO that was published in PLOS One shortly after the congress.  Dr. Sjoukje Haisma also presented her poster on video (see below).

They performed a total of 1440 smartphone readings and 120 ELISA tests. In the low calprotectin range (<500 μg/g) IBDoc®, QuantOnCal and CalproSmart showed 87%, 82% and 76% agreement with their companion ELISAs. In the high range (>500 μg/g) the agreement was 37%, 19% and 37%, respectively. Overall IBDoc showed the best clinical concordance with 82% of all measurements resulting in the same clinical interpretation as the companion ELISA (Figure 1). To assess user-friendliness the students filled in standardized system usability scale (SUS) scores after the first, seventh and tenth and last day of performing the home test. The first day of testing showed the lowest scores. On the last day of testing IBDoc® was awarded the highest grade (B) of all home tests, mainly because the smartphone application was error-friendly and therefore less cumbersome to use (Figure 2). CalproSmart and QuantOnCal had significantly higher reading error rates (RER) than IBDoc®, respectively 5.8% and 4.8%, versus 1.9% (Figure 3).  They argued that any shift of calprotectin values out of the target range (false positive), and into the action range (> 500 μg/g) is a trigger to change the treatment plan. In order to appreciate the true value of the home tests in the high range, they also evaluated the concordance with the respective companion ELISAs and observed that 119 of 125 IBDoc® readings <500 μg/g were concordant with fCAL results (95%), compared to 35% and 49% for the QuantOnCal—IDKCalprotectin and CalproSmart—Calprotectin-ALP pairs.

In a second poster Dr. Russell Walmsley (video below) showed that the care for patient in a remote care setting was not inferior to conventional care. They randomly assigned 50 IBD (UC and CD) patients to be followed for 52 weeks either to be followed via standard clinic care with face to face meetings between patients and their physicians and 50 patients to be remotely monitored by a combination of two apps. The first app, IBDSmart allowed the patients to fill in Quality of Life (IBDQ) and clinical symptom assessments questionnaires (SCCAI for Ulcerative Colitis patients and HBI for Crohns patients). The second app was IBDoc® that allowed the patients to perform fecal calprotectin measurements at home. The patients used the two apps every 3 months. 82% completed more than 50 % of the required questionnaires and 72 % completed more than 50% of the IBDoc® tests. 58 % of the patients felt comfortable using the apps to replace conventional face to face meetings with their physicians. 78 % of the gastroenterologist were very or somewhat comfortable using the apps and 58 % felt that the apps could adequately replace the face to face appointments with their patients. However, 54 % of the physicians reported that there was something that they could not communicating to the patient using the app alone. For face to face meetings only 10 % of the physicians felt that there was something they could not communicate to the patients.

Overall the authors conclude that the use of IBDSmart and IBDoc® in routine clinical care of IBD patients over 12 months is demonstrated to be acceptable, usable and non-inferior to standard clinic-based care.